Yesterday my daughter broke down crying in frustration because she was trying to trace a picture out of a book while holding it up to the window.  At this point I decided that I would try to build a simple lightbox for her.  My first thought was to use a old LCD backlight I had from an old Sony Vaio laptop...unfortunately, I couldn't figure out what pinout the interver used.  It had one black wire, one white wire, and two gray wires...not too useful.  The closest I could find was this universal inverter, so I felt comfortable assuming that those wires represented: +5V, Ground, On/Off, and Dim.  I tried all possible combinations and nothing worked, of course I could have destroyed the circuit with one of those combinations.  Since this was to be a quick and cheap project, the $70 for the universal inverter or the hours spent trying to figure out the pinout were not worth it.

Even though the backlight wasn't useable, I salvaged the plastic screen and the diffuser from the LCD.  The plastic screen was interesting because it wasn't clear, instead it had an array of white dots...I figured that that would only help in diffusing the light.  The next step was to find lights, I tried a set of 120VAC white LED pucks from Wal-Mart, but only 1 of the 3 pucks worked.  Hoping that this was just a fluke, I returned the lights for an exchange only to find that now 0 of the 3 pucks worked.  Clearly this wasn't going to work, so I went back and got a pair of 10" battery powered LED lights from GE...as expected, these worked flawlessly.

The next step was to build the box.  Using scrapwood I had lying around (including a piece from an old TV cabinet) I build a quick box with a hinge so that you could open the box to turn the lights on and off.  The lights were attached using velcro so that you could replace the batteries.  The lightbox was about $20 and 2 hours of work, so I was pretty excited.  Furthermore, almost everything can be salvaved when she no longer wants a lightbox.  For now, she is thrilled and has been tracing like crazy. 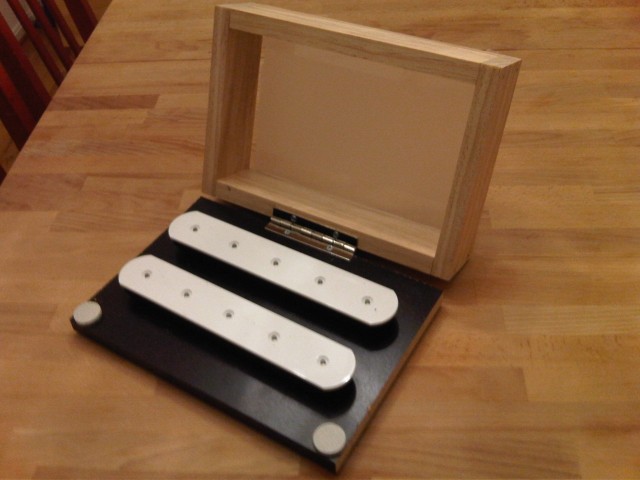 Here you can see the two light strips, the piece of salvaged TV cabinet (the black part), a bit of hinge left-over from the patio bench project, and 3x1 pine left-over from the pull-out pantry project.  The box construction was pretty simple and is held together with 2d 2" nails.  The circles are adhesive plastic "gripper" feet to keep the front part the same level of the hinge.  These same feet are also used on the bottom to prevent the box from sliding or damaging furniture. 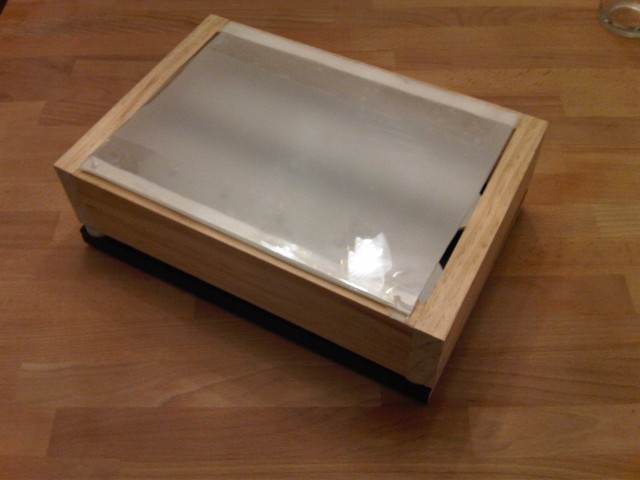 The plastic screen is crudely attached with double-sided tape.  As you can see the plastic is just slightly smaller than 10" (the length of the lights), so there is a gap on the sides.  If I run across a good piece of glass or plastic I might replace the screen and do a more professional looking mounting. 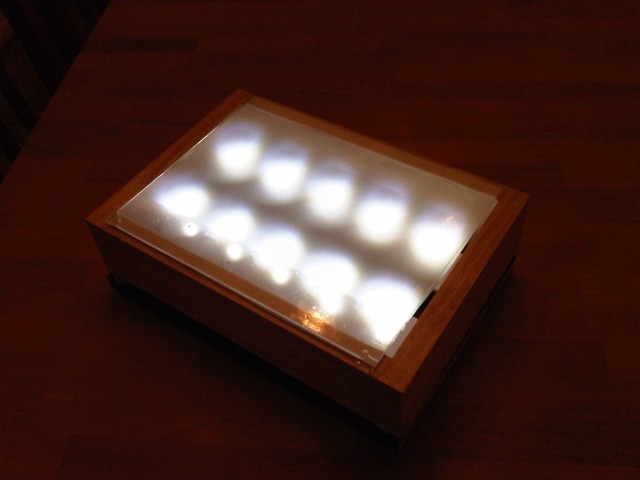 As you can see, the light isn't perfectly diffused so this won't be replacing any professional lightboxes.  However, for tracing the diffusion appears to work just fine.